Things to remember when taking a new header picture (since I’m getting a little looney – too much coffee):

And pet the kittehs.  They get jealous and underfoot if you don’t. 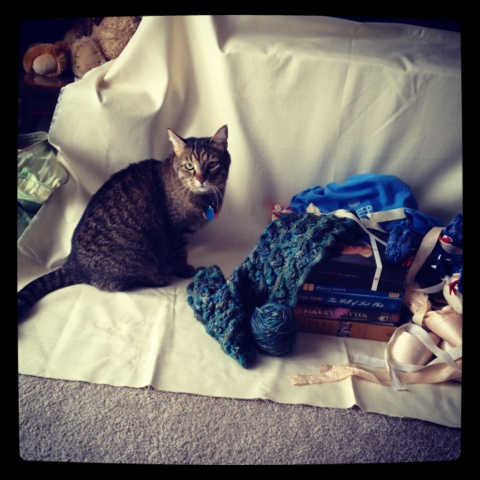 So, in the very-early Saturday morning I have made progess on both the “definite TO-DO list”:

So, if you like, feel free to give feedback on my new template (outside of the header picture – I plan on working on a new picture when I have a bit of daylight to hand). I’d love to hear what to you think of the work in progress.

So, I have an account on Posterous now to upload the majority of my iPhoneography pictures.  It is fun.  Yet, I think I’ll still be sharing a few photos here and there on SSWB because of my furry kids.  They are too cute. 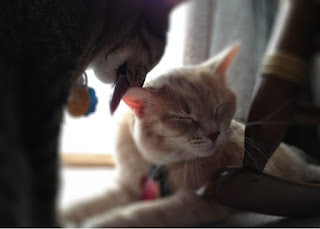 Good grooming is important!  (But does Dante really enjoy having his ears washed?)

So I hemmed and hawed….  I wasn’t sure about signing up for Bloggiesta this year.  My schedule is crazy, my family is crazy (I haz a new nephew, he is cute as a bug!), I’m on edit 7 of my book (getting very close to the point where I’m willing to let other people read it), I’ve been in a blogging slump….

Ah-ha.  Blogging slump.  Giant backlog of reviews.  Lots of housekeeping to do.

OBVIOUSLY, I should sign-up for Bloggiesta.  I need it really bad!

I have to work part of the weekend, so I shouldn’t bite off too much, but the definite TO-DOs:

So much for not listing too much.  Haha.  Maybe I will peep in on a mini-challenge or two, too!

I was driving along the other day and heard a song on the radio (I don’t always listen to the radio, usually I have an audiobook on my iPhone).  It was catchy, with a loping-lazy bounce and a little marimba hook.  I would have sworn it was John Mayer – not his style, but maybe he was branching out.  Nope, not him.  I did some Googling and the artist is the Belgian/Australian multi-instrumentalist Gotye.

The song?  “Somebody That I Used to Know”

And then Kate (via her friend Jeruen) turned me onto this:

There are five, FIVE, people around that guitar. They are Walk Off the Earth.  I will obsess over them, too.

Since I got my iPhone in November, and downloaded Instagram in January, I’ve been taking so many pictures with my iPhone.  It’s always with me, and has quite a good camera, so I decided to look up a book for help/inspiration. 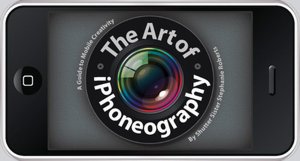 I’d seen Stephanie Roberts’s The Art of iPhoneography floating around the store and decided to check it out.  The shape of the book is eye-catching, even though it isn’t very large, and opens horizontally with the “home button” at the spine.

Stephanie is a documentary filmmaker and photographer (www.littlepurplecowphotography.com) and the focus of the book is less on the technical aspects of taking pictures with an iPhone and more about using that iPhone to look around you and capture spontaneous images.  The Art of iPhoneography is divided into major sections about the native camera, the more popular camera apps, photographers who are actively pursuing iPhoneography and samples of their work, and an inspiration section to spark your creativity.  She urges you to be present and actively see the possibilities around you.  Stephanie also urges everyone to share their work in some small way, through a blog or photo hosting site.

I thought this was a really handy guide.  Not so helpful to me with the “this is how your iPhone native camera/camera roll works” but the section of popular apps was very informational.  I only had Instagram and Hipstamatic at the beginning (and I was having trouble working out Hipstamatic) but I soon added Photoshop Express, ShakeItPhoto (love it), Photo fx, Lo-Mob, Camera Bag, Mill Colour, AutoStitch, PicGrunger (way cool), TiltShiftFocus (used it several times already), and TiltShiftGen.

Addicting, let me tell you.  I also signed-up for a Posterous account to upload my iPhone-taken and -altered pictures.  Too much fun and so time-consuming.

I’m thinking about making my own daily photo challenge using some of the prompts from the back of the book.  Get ready for your close-up, my kitty-boys!

This is the standard pose adopted by the cats when they want something. There are more cat photos coming – they are my captive subjects. 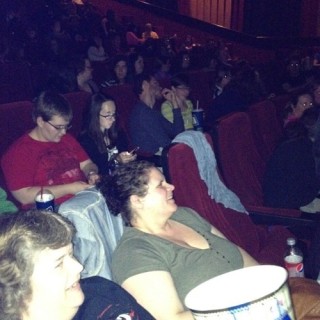 22 bookstore employees and assorted friends and family members.  2 rows of a movie theatre booked.  Midnight premiere.  Hmm, must be The Hunger Games.

This had to be one of the best book-to-movie adaptations I’ve seen in quite a long time.  Being a first-person narrative, it probably wasn’t easy.  There wasn’t too much exposition so the story didn’t feel bogged down in trying to explain how Panem came into being or why Katniss and Gale are out hunting beyond a dead electric fence or why the citizens of the Capitol treat the Hunger Games like the World Cup soccer tournament.  The two small added scenes were quite clever and created the layer of manipulative government Katniss suspects in the book.  It was a good two hours of entertainment.

The casting for this movie is spot on.  Jennifer Lawrence owns Katniss inside and out.  Josh Hutcherson as Peeta is effortlessly charming.  President Snow (Donald Sutherland) looks sweetly paternal.  Stanley Tucci as Cesar-the-TV-personality is almost exactly like I imagined him in the book – charming, smarmy, false, and an outrageous blue bouffant.  Liam Hemsworth looks good as Gale (capable, big, strong, quiet) but doesn’t have much to do so the adaptations for Catching Fire and Mockingjay (why these three movies weren’t shot back-to-back since it was practically a given that The Hunger Games would make bank for Lionsgate…it out-pre-sold the last Harry Potter and Twilight movies) are more important for him.

Now, there are two drawbacks.  One (minor spoiler if you haven’t read the books – and if you haven’t read the books then you really ought to), I never felt Katniss and Peeta were in mortal danger at the end of the Games.  There are serious concerns about their injuries in the book but neither of them have more than a few scratches in the fight with Cato.  This doesn’t provide enough of a contrast with the love angle Kaniss has to play with Peeta.  I fault the directing on that one.

As to the second drawback, this is a major fault of both the cinematographer and director.  Nearly every part of this movie was shot using shaky-cam/handheld work (exceptions are Cesar’s segments which were obviously steadycam/crane/dolly shots).  The shaky camera combined with quick cuts running segments through woods with light filtering through leaves and foliage flashing past the camera added all up to one thing: motion sickness.  I don’t get motion sickness – you can put me on the craziest roller coaster and I am good to go – but this really got to me (a quick poll of the group members revealed that most of us started feeling queasy during the movie).  We were sitting near the front and that probably made it worse so I would recommend sitting in the back to you have other places to look during the movie if you need the room to stop spinning.  There wasn’t any need to have the shaky camera work throughout the movie.  The fast cuts were enough.

Previews:
1) Movie the Movie: ??? was this for real?  or is it a spoof of a trailer??  I dunno.
2) ParaNorman – looks like Coraline, possibly might be cute
3) The Amazing Spiderman – not sure what to think; since I’m not a Spiderman afficionado I’ll defer to my friends who are and they say this looks good
4) Titanic 3D – Yarf; money-making grab by Cameron and I don’t get WHY they had to post convert it to 3D because it’s going to look icky and dark (although, confession, even though I ding this movie for the story it has great effects and I get all choked up every time the theme music comes up)
5) The Host – the most low-rent teaser trailer ever; it’s currently filming so they just put pictures representing all genders and cultural types with the “alien” ring around their pupils culminating with Saoirse Ronan…boooooorrrrrrinnnnnggggg (and the book is just Twilight with Aliens instead of Vampires, trust me I know; I read it)
6) What to Expect When You’re Expecting – this does look very funny (“my kid ate a cigarette” “no judging”) so I might break my rule about seeing comedies/rom-coms infested with celebrities
7) Breaking Dawn Part 2 – also a low-rent teaser; seriously, all they had ready was a shot of Bella stalking a deer?  That movie is already in the can.  Boring.

(I was disappointed in the trailers this go round – with all the super-awesome movie due out this summer this wasn’t a great selection; I get that this is a “teen” movie but there are more things to pick that are shot/have better trailers)