I am woefully﻿ behind in my Newbery project!  Only one book this year!  The 1966 winner of the Newbery Medal.

I, Juan de Pareja is the imagined autobiography of real-life painter Juan de Pareja.  Juan was born a slave of mixed-race in seventeenth-century Spain and willed to master painter Diego Velasquez on the death of his mistress, becoming Velasquez’s assistant. He was later freed and became a respected painter in his own right (The Calling of St.Matthew is his most famous work, apparently on display at the Prado but I can’t get a link for it).

de Trevino’s rendition of Juan (or Juanico, the diminutive used for much of the book) presents him as a an open, good-hearted boy, a good Catholic, and an earnest servant with some self-awareness that he is different from Spanish servants.  As a young man he becomes more aware of his situation as a slave.  Although he does not actively rebel against “the system”, there is some feeling of injustice or unfairness in how he can be owned simply for being dark-skinned and born of a woman enslaved.

The best passages of the book come from Juan’s budding fascination with painting and his attempts to learn to paint as Velasquez does although the slavery laws forbid it.  Juan’s awe at how Velasquez used light and dark in the paintings, how the colors were mixed, can be shared by the reader.  I don’t paint or draw and I felt awestruck just reading the imagined depiction of Velasquez’s studio.

This book is not a fast read despite being fairly short.  I think it would be of good use in a unit on slavery to show that the concept was not limited to certain parts of the world and to introduce the historical foundations of racism and slavery.

Now for the vocabulary – there were so many words!  Some are in Spanish or have a religious or historical origin.  Definitely a good book for making word-lists:

Bonk is a really good general-audience science book, not only for the information it conveys but also for highlighting the issues of pure research vs industry-driven and the fact that homo sapiens still have a lot of hang-ups (for realz). When you (and your spouse) have to volunteer as subjects for a 4D ultrasound of human sexual activity just to see what goes on, you deserve a medal.

Bonk also has an interesting dichotomy in the scientific material Roach quotes and presents and the hilarious footnotes highlighting some of the crap she found surfing the ‘Net.

Saw this on the non-fiction new paperback table at work and I was like, “My people, yes, we must unite!!”

And then I read it…this is not a uniting-type of book.  Should have read the reviews first.

I’m feeling a combination of “meh” and “I feel trivialized by the very book that is supposed to celebrate my peeps”.  I did NOT appreciate the snarkiness of the quizzes and frenemies sections (and, for a book that asks in the introduction that we all be more accepting of one another, it gets pretty mean at times).  The chapters were really repetitive and this felt less like a celebration of geek-girl culture and more like a humorous attempt to put us into neat little boxes.  It has excellent lists of websites, books, and movies (although some did start to feel condescending at times) but loses over the annoying footnotes.

Still not sure how we will take over the world. That part wasn’t very clear.

My family was so thankful this year for one very good reason:

Mom (and yes, that’s the hat I started knitting when she was in the SICU).  We got to have her for about six hours today for the Christmas holiday and it was so nice to have her home for a little while – it was the best present of all.  She’ll be discharged from rehab on Wednesday!!

So to quote Tiny Tim:  God bless us, everyone.

The bookstore has been batshit crazy as of late.  People have suddenly remembered THEY NEED TO BUY CHRISTMAS PRESENTS and RIGHT NOW!  Which is a) a good thing for business, but b) kindergarten rules apply at the bookstore:

1.  If you (as a customer) see me (a bookseller) woking with another customer (showing him/her books, listening as the customer describes what he/she is looking for, looking something up on the computer while said customer looks over my shoulder, etc) DO NOT butt into the bookseller-customer conversation by saying “I just have a question.”  Congratulations, so does the person I am currently helping.  Now you look like an inconsiderate jerk and makes me not want to help you at all.  The only exceptions are emergencies like “Call 911!”, “I think there’s a fire!”, “I’m having a heart attack!”, or “I lost my child!”  Trust me – I, and my fellow booksellers, will drop everything to help you in those situations.  Your need to find Paula Deen’s Southern Cooking Bible does not constitute an emergency.

2.  Remember having to line up to go to the lunchroom?  The same principles apply to queue lines during Christmas (or any time of the year, really, and are totally not limited to bookstores).  Line-jumping because you are “in a hurry” only gets you redirected to the back of the line.  Pretty sure the people who lined up politely are also “in a hurry” but will be put-out because you budged in front of them.  And some of those polite customers are vocal if you do!

For the chuckles, some random gems from the season:

Bonus:  Overhead at the hospital on Hanukkah:  “That’s a mariachi band – it has an accordion.” (No, that’s a klezmer band – accordions are not exclusive to South of the Border.) 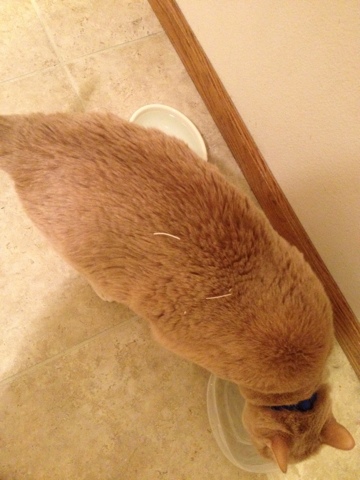 Poor Dante.  He’s so staticky right now – rolling around on the floor caused all the paper bits from punching my own gift tags to stick to him (there’re lots more on his tummy but he wouldn’t let me take a picture).﻿
I received my Secret Santa package about a week ago but I’ve been really remiss in blogging about it (particularly as I would remember while at work and had no picture of what I actually received).
Well, my SS was Jill of Book, Books Everywhere and just look what was in my package!
﻿ 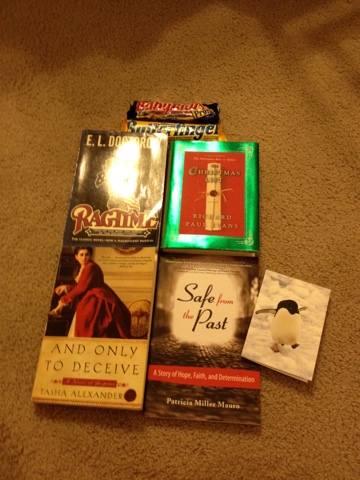 ﻿
Talk about getting spoiled!  I almost cried when I opened the box.  She sent EL Doctorow’s Ragtime (something I keep thinking I have then get home and realize I don’t have it), Tasha Alexander’s And Only to Deceive (my SIL says those are good), Richard Paul Evan’s The Christmas List, and Patricia Miller Mauro’s Safe from the Past AND chocolate (yum, yum).  Thanks so much, Jill!  This December has been hard, what with Mom’s diagnosis and surgery and all (she’s doing so well, we’re all so thankful), so a lovely box of Christmas cheer and book love was just what I needed.
Thank you many times!  Merry Christmas and Happy New Year!

Having read through two Austen-inspired books – and been rather underwhelmed – I tried out a third purchase from the Sourcebooks sale.

Huzzah, these are my people!! An Austenesque novel that neither a) fails miserably in execution or b) stuffs enough sex scenes into the narrative to make even a Regency Rake want to take a powder (because that’s what an Austen variation/re-telling needs – lots and lots of uncomfortable sex).

At first, I wasn’t quite sure where Robyn fit into the narrative (and the beginning was a little pokey) but once all the characters got to Purley Hall for the Jane Austen Conference things started to pick up. It’s easy to teAt last. An Austenesque novel that neither a) fails miserably in execution or b) stuffs enough sex scenes into the narrative to make even a Regency Rake want to take a powder (because that’s what an Austen variation/re-telling needs – lots and lots of uncomfortable sex).

Oxford professor of English Katherine Roberts is off to attend the Jane Austen Addicts…and to meet her favorite author, Lorna Warwick.  The famously reclusive Warwick writes the Regency bodice-rippers Katherine is addicted to but Katherine is in for a surprise – the author she corresponds with is really Warwick Lawton…a man.

Robyn Love is saddled with a big problem, two actually: a Jane Austen addiction and a dead-beat boyfriend.  She feels unappreciated and jumps at the chance to attend the conference, a weekend to find other kindred spirits.  Can she find herself, too?

At first, I wasn’t quite sure where Robyn fit into the narrative (and the beginning was a little pokey) but once all the characters got to Purley Hall for the conference things started to pick up. It’s easy to tell Connelly is a Janeite – she knows all the books, variations, adaptations (and they’re almost all named-checked in the book as are the real books/movies) – and she gives the reader the best and worst of the breed. The narrative nods to the plot of Pride and Prejudice in places but takes the bones that it needs for plot and leaves the rest. Kudos also to keeping the falling action of the book from becoming overlong, stopping at just the right place.

If you’re like me, and have been wondering where to start to find an entree into Austen-inspired fiction, definitely take a look at A Weekend With Mr. Darcy.