A temporary engagement, a lifetime in the making . . .

After years of fending for herself, Kate Taylor found friendship and acceptance in Spindle Cove—but she never stopped yearning for love. The very last place she’d look for it is in the arms of Corporal Thorne. The militia commander is as stone cold as he is brutally handsome. But when mysterious strangers come searching for Kate, Thorne steps forward as her fiancé. He claims to have only Kate’s safety in mind. So why is there smoldering passion in his kiss?

Long ago, Samuel Thorne devoted his life to guarding Kate’s happiness. He wants what’s best for her, and he knows it’s not marriage to a man like him. To outlast their temporary engagement, he must keep his hands off her tempting body and lock her warm smiles out of his withered heart. It’s the toughest battle of this hardened warrior’s life . . . and the first he seems destined to lose.

Kate Taylor, music teacher, is the heroine of the third Spindle Cove novel. She’s got a mysterious past she can’t remember, having been raised as a charity pupil, and her hero – Corporal Thorne – knows who she is, even if she doesn’t (and he’s not telling).

There are many shades of Jane Eyre in this book – the charity school, the impoverished music teacher, the long-lost relatives, and the leveling of social status (although there are no crazy wives tucked up in the attics – everyone in the Cove would know, no secrets in that village).

While not as frenetic as A Week to Be Wicked (which is a force unto itself), this is a delightful book, although I wanted to throttle Thorne for being so stubborn.

Chaucer loves to bake himself under my desk lamp.  It is his special heat source, like that of a heat lamp in a baby chicken pen.

Observe:  I was getting set to do some work at my desk.  Chaucer wormed his way onto the desk and declared his intentions of getting in the way. 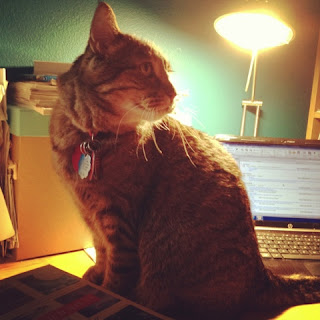 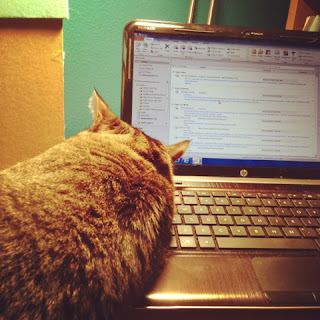 So I moved the laptop over and Chaucer just spread out. 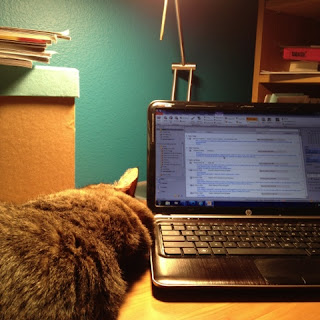 And then he laid on the computer keyboard again and got scolded.

I don’t think he cared. 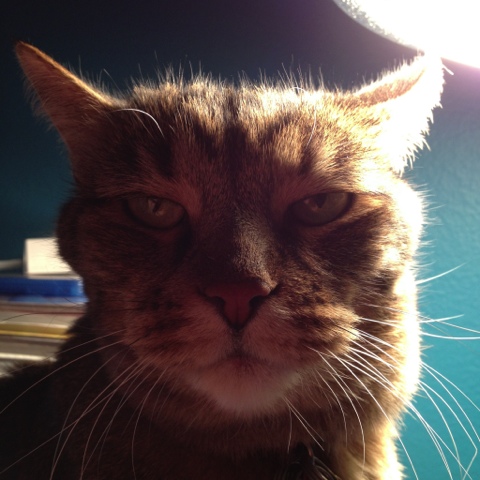 But he decided to let me apologize by giving him a tummy rub. 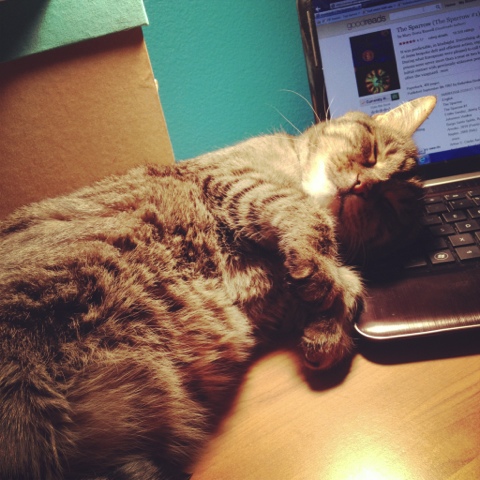 James Bond is fifty years old this year – he has never looked better.  I’ve been excited about Skyfall since shooting started after MGM got itself out of financial trouble.

Daniel Craig, at the behest of M and Her Majesty’s government, is after a terrorist who has acquired a list of embedded MI-6 agents.  During pursuit one of the terrorist’s minions Bond is accidentally shot by a fellow agent, falling into a river (leading to one of the best opening title sequences, with theme song by Adele).  He is announced as deceased.

Which any Bond fan knows is false because that would make a really short movie.  C.f. You Only Live Twice.  While Bond recuperates on a desert island the terrorist begins releasing agents’ names – deliberately taunting M.  A decidedly shaky, out of shape Bond returns to service.  M trusts him, a fellow government wonk (played brilliantly by Ralph Finnes) disagrees.  Bond does his job and brings in the terrorist: Silva.

Silva, as played by Javier Bardem, is the Bond villain to end all Bond villains.  He’s a megalomaniac.  Without conscience.  He pushes the envelope (there’s a brief hint of a homoerotic interplay with Bond).  Silva has this weird, creepy little laugh.  And don’t get me started on the amazing SFX work done when Silva takes out his partial plate/bridge.  Ack, ack, ack.

But the greatest part of this movie is Judi Dench in this, her best M outing yet.  While she had a greatly enlarged part in The World is Not Enough, Dame Judi brings gravitas, humor, and a beautiful performance as someone who can’t afford to second-guess or doubt her decisions.

I loved the score, the cinematography (there is an amazing fight sequence with a sniper in a high-rise that is backlit with rotating neon ad signs – wow), and the casting (Ben Wishaw as the new Q was genius, pun intended).  It got a little dusty in the theatre toward the end.  My only issue was the standard-issue “expendable Bond girl”, Severine: if she’s just confessed to being a child prostitute/abused woman Bond really ought not to sneak into her shower like a creeper.  Just saying.

He’s the only man she’s ever loved…

She’s the only woman he never noticed…

Derek never really took note of his shy, wallflower lady writer. But suddenly she’s exquisite…and he can’t get Annabelle out of his mind! She must be pursuing someone, but who? For some inexplicable reason, the thought of her with another man makes Knightly insanely jealous.

But Knightly’s scandalous periodical has been targeted for destruction by a vengeful Lord Marsden, and the beleaguered editor now faces a devastating choice: either marry Marsden’s sister to save his beloved newspaper…or follow his heart and wed his Writing Girl.

This review is mostly lost, but I have to say I did love the conclusion to Maya Rodale’s Writing Girls series despite some modern-sounding language. Annabelle is such a sweet character and Derek’s predicament gave some good conflict to work with.  The reader write-ins for Annabelle’s “advice” are hilarious no matter the anachronisms.  However, some of the secondary characters are flat.

(Beautiful cover, though, no?)

I really like how, after the intense story A Game of You, this volume is a short-story collection that moves backwards and forwards in time to add to the mythology of Gaiman’s Morpheus.

I loved “Three Septembers and a January” and the last three stories “Orpheus”, “The Parliament of Rooks”, and “Ramadan” (beautifully drawn and lettered). It was also interesting to see the art styles shift with the different artists used for each story.

I wasn’t sure if this was the original order of publication – one story, “Thermidor”, ended with a panel stating “Next: Augustus”. However, the next story in the book was “The Hunt” and I didn’t see any other stories with that type of final panel.

Sir Griffin Barry leapt out of the bedchamber window at age seventeen after a very disappointing wedding night, drank a bit too much at the pub and woke to find that he’d joined the crew of a pirate ship! Years later, he has become one of the most feared pirates on the high seas, piloting the Flying Poppy, a ship he named after the wife whom he fondly (if vaguely) remembers.

What happens when a pirate decides to come home to his wife — if she is his wife — given that the marriage was never consummated? And what happens when that pirate strolls through his front door and is met by… well, that’s a surprise!

A very lovely, cute, and a nice companion novella to Eloisa James’s The Ugly Duchess. Like its big sister, I think the reconciliation between hero and heroine comes a bit fast (I think I’d have made him sleep on the couch for at least one night before deciding he was a delicious hunk of sexy pirate).  But I also liked how the father/son drama was very minimal and it was deliciously funny in places.  So win-win.

The fifth installment of Gaiman’s Sandman, A Game of You, brings back Barbie from volume two’s A Doll’s House.  She is living in a boarding house with as odd a collection of characters as in that book and having residual flashes of a dream where she is a princess.  When a dream character becomes real and dies in front of her, Barbie falls into an unending dream as a lethal hurricaine bears down on the city.  She must traverse the Dreaming and avoid the Cuckoo (and no, that’s not a bird).

I loved the intricacy of the stories and the myriad characters, including the mysterious Thessaly.  The moon-path was an incredible plot device and so good when mixed with all the other Greek mythology elements.  The last chapter was heart-breaking.

Rebecca Skloot, author of the acclaimed The Immortal Life of Henrietta Lacks, and her father edited the 2011 Ecco volume. This is a very well-curated collection of science essays spanning from perennial sources The New York Times Magazine, The New Yorker, and Discover to the less-common Vanity Fair and Mother Jones and the Speakeasy Science and Not Exactly Rocket Science blogs. Great breadth of sources.

Must-read articles include “What Broke My Father’s Heart” (included in The American Essays 2011 edited by Edwidge Danticat), “BP’s Dark Secrets”, “The Estrogen Dilemma” (this one is really good, I took a course in clinical epidemiology from one of the original researchers on the WHI study that was terminated due to unexpectedly poor outcomes), “Cary in the Sky With Diamonds”, and “The Enemy Within”.