From USA Today bestselling author Laura Lee Guhrke comes the story of a bargain, a marriage of convenience…and the chance for love to last a lifetime.

They had a deal…

From the moment she met the devil-may-care Duke of Margrave, Edie knew he could change her life. And when he agreed to her outrageous proposal of a marriage of convenience, she was transformed from ruined American heiress to English duchess. Five years later, she’s delighted with their arrangement, especially since her husband is living on another continent.

But deals are made to be broken…

By marrying an heiress, Stuart was able to pay his family’s enormous debts, and Edie’s terms that he leave England forever seemed a small price to pay. But when a brush with death impels him home, he decides it’s time for a real marriage with his luscious American bride, and he proposes a bold new bargain: ten days to win her willing kiss. But is ten days enough to win her heart?

Edie Jewell – an American heiress – has made the ultimate marriage of convenience: she’ll pay her husband’s debts and competently manage the duchy as long as he returns to Africa and never asks her to consummate the marriage.  Margrave, unfortunately, returns five years later haunted by a near-fatal lion attack determined to become a responsible duke with a wife by his side.  Their agreement is broken and Edie prepares to return to New York but Margrave persuades her to give him ten days to change her mind.

What makes this convenience-to-love romance so good is the time Guhrke takes to build trust between Edie and Margrave.  Edie exhibits PTSD symptoms (we are not left in the dark long before we understand why) and the care Margrave takes to ask her about triggers, what makes her more comfortable versus less comfortable, etc. makes the resolution of their love story so much sweeter.  A very lovely story.  I look forward to future installments in this series.

Summary from Goodreads:
Sometimes It Takes a Scandal…

Abigail Weston has everything: beauty, wit, and one of the largest dowries in England. Her parents hope she’ll wed an earl. Abigail hopes for a man who wants her desperately and passionately. But the money seems to blind every man she meets—except one.

Sebastian Vane has nothing. He came home from war with a shattered leg to find his father mad and his inheritance gone. He’s not a fit suitor for anyone, let alone an heiress. But Abigail lights up his world like a comet, bright and beautiful and able to see him instead of his ruined reputation. And it might end happily ever after…

To Reveal Your Heart’s Desire

…Until Benedict Lennox begins courting Abigail. Ben is everything Sebastian isn’t—wealthy, charming, heir to an earl. Sebastian won’t give up the only girl he’s ever loved without a fight, but Abigail must choose between the penniless gentleman who moves her heart, and the suitor who is everything her parents want.

Abigail Weston (and her sister Penelope, who has an upcoming book) was introduced in the previous book, Love and Other Scandals.  She has an enviable dowry but her father is a Cit – catching a titled man but not a fortune hunter is tricky.  However, now that the family has moved to Richmond – next door to a wealthy earl with an eligible son – it seems Abigail might make a desirable ton marriage.

But their other neighbor is the supposedly disreputable Sebastian Vane.  His mad father (not a euphemism, the father was actually mentally unstable) lost (read: was cheated by the earl) the majority of the family estate, then went missing under questionable circumstances, and now a sum of money is missing from the earl’s estate.  At best, Sebastian is an injured, angry ex-soldier.  At worst, he’s a thief and patricide.  And Abigail can’t stay away.

I really liked this second installment in Linden’s Scandalous series.  The “50 Ways to Sin” pamphlets continue to scandalize everyone.  Abigail is very sweet and plucky, a perfect foil to Sebastian’s barely contained rage.  The grotto scenes were excellent.  I loved the seeds sown between Lennox and Penelope for the next book and the conflict between Sebastian and Lennox who used to be friends felt very real.  My only disappointment came in how ready Abigail seemed (for a little while at least) to put up with the earl’s clearly malevolent personality to allow Lennox to court her.

Summary from Goodreads:
From the Hugo Award-winning duo of Brian K. Vaughan (The Private Eye, Y: The Last Man) and Fiona Staples (North 40, Red Sonja), Saga is the sweeping tale of one young family fighting to find their place in the universe. Searching for their literary hero, new parents Marko and Alana travel to a cosmic lighthouse on the planet Quietus, while the couple’s multiple pursuers finally close in on their targets.

The third Saga trade volume!!  This arc doesn’t move through the galaxy with the same sweep as the first two trades but it makes the world so much richer.

Poor Lying Cat – your abilities get confusing when the humans are hallucinating.

Summary from Goodreads:
New York Times bestselling author Lauren Willig “spins a web of lust, power and loss” (Kate Alcott) that is by turns epic and intimate, transporting and page-turning

As a lawyer in a large Manhattan firm, just shy of making partner, Clementine Evans has finally achieved almost everything she’s been working towards—but now she’s not sure it’s enough. Her long hours have led to a broken engagement and, suddenly single at thirty-four, she feels her messy life crumbling around her. But when the family gathers for her grandmother Addie’s ninety-ninth birthday, a relative lets slip hints about a long-buried family secret, leading Clemmie on a journey into the past that could change everything. . . .

What follows is a potent story that spans generations and continents, bringing an Out of Africa feel to a Downton Abbey cast of unforgettable characters. From the inner circles of WWI-era British society to the skyscrapers of Manhattan and the red-dirt hills of Kenya, the never-told secrets of a woman and a family unfurl.

I am a huge fan of Lauren Willig’s Pink Carnation series and was really excited to read her first stand-alone, non-Pink novel.  But about half-way through the first chapter I put it down.  I wasn’t enthused by the characters for some reason.  However, it has been staring at me from the corner of my dresser since then so I picked it back up for Readathon.

I was immediately sucked into Clemmie’s family and the mystery surrounding her Grandma Addie.  Such a rich world created in post-World War I Britain and Kenya and end-of-the-20th century New York City.  Granted, I did guess the Big Family Secret but that is only half of the plot.  Pink fans should be on the lookout for a Vaughn descendant that slipped into the Kenya storyline.  Definitely a novel to recommend for fans of Downton Abbey.

Summary from Goodreads:
Milo mopes in black ink sketches, until he assembles a tollbooth and drives through. He jumps to the island of Conclusions. But brothers King Azaz of Dictionopolis and the Mathemagician of Digitopolis war over words and numbers. Joined by ticking watchdog Tock and adult-size Humbug, Milo rescues the Princesses of Rhyme and Reason, and learns to enjoy life.

Poor Milo, stuck in the Dolldrums. I remember having this read to me in grade school yet never read a copy on my own. So I decided to re-read it during the Readathon.

Just as wonderful as I remembered. And far more complicated and intricate in vocabulary and plot (how did this not win a Newbery Medal?). Either I wasn’t paying attention or it’s the perfect read-aloud.  It was the perfect Readathon read.  My edition had a lovely preface by Maurice Sendak, which seemed especially timely.

FTC: I read a strip of this book that I got through work.

It is the readathon finish line. Finally.

Since I got started three hours late (7am on Saturday is like the worst and it took forever just to get the motor going, even with coffee) I read a little bit more today from my official readathon list. 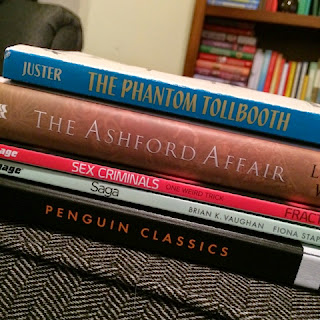 Yup. 1464 pages read, a little over 12 hours total.  6.2 books (Darragh McKeon’s All That is Solid Melts Into Air I only started; probably going to break my heart).  I used the Bluefire app on my iPad to read the Linden, Gurhke, and McKeon; it works out really well, reads quickly, and the formatting on the HarperCollins DRCs is really nice.

How well did readathon go this year? Well, about 130am (hour 16?) was pretty daunting since it was about then that I developed massive indigestion stemming from what was likely the ingredients in Snyder’s of Hanover’s cheddar cheese pretzel bits (note to self: all processed cheesy-type food products are usually hell for you during readathon [cf. generic frozen garlic pizza with extra cheese, dodgy frozen lobster bites); stick with the trail mix, dried strawberries, fruit, and brownies).  I made it through to finishing my book but then decided it was simply time to go to bed and sleep it off.  So I did a little make-up reading this afternoon to make up for the late start and my ornery stomach, only lawnmowing and the weather (boy did we have a storm) intervened so I wasn’t able to read as much as I would have liked.

Thank you, everyone who cheered and read and otherwise commented, rec’d books, etc on posts during readathon and, as always MANY MANY heaps of thanks and gratitude to Heather and Andi because readathon wouldn’t be such a great thing if they didn’t work so darned hard.

Summary from Goodreads:
Suzie’s just a regular gal with an irregular gift: when she has sex, she stops time. One day she meets Jon and it turns out he has the same ability. And sooner or later they get around to using their gifts to do what we’d ALL do: rob a couple banks. A bawdy and brazen sex comedy for comics begins here!

Named one of Time Magazine’s top 10 graphic novels for 2013.

The Sex Criminals Vol 1 trade is out.  I’ve already reviewed issues 1-5, which are included here, so what are you waiting for??

Get thee to a store and buy it already!

I programmed the coffee-maker – it’s brewing up Red Velvet Archer Farms coffee as I stumble out into the kitchen.

And a stack of books:

Nook – American Gods
The Whipping Boy
The Door in the Wall
The Phantom Tollbooth
The Go-Between
Fanny Hill
Landline
The Penguin Anthology of Twentieth-Century Poetry
The Age of Miracles (half-read)
The Ashford Affair (half-read)
Tampa (half-read)
Sex Criminals
Saga, Vol 3
Hawkeye: Little Hits
Bluefire app on iPad – The Truth About the Henry Quebert Affair, All That is Solid Melts Into Air, How to Lose a Duke in Ten Days, and It Takes a Scandal (I have four DRCs expiring in a week, eep)

Now, time for some shut-eye because the cats are doing that saddest-cat-ever-because-no-attention-for-meeeeee thing: