Summary from Goodreads:
The captivating first novel by the best-selling, National Book Award nominee George Saunders, about Abraham Lincoln and the death of his eleven year old son, Willie, at the dawn of the Civil War

On February 22, 1862, two days after his death, Willie Lincoln was laid to rest in a marble crypt in a Georgetown cemetery. That very night, shattered by grief, Abraham Lincoln arrives at the cemetery under cover of darkness and visits the crypt, alone, to spend time with his son’s body.

Set over the course of that one night and populated by ghosts of the recently passed and the long dead, Lincoln in the Bardo is a thrilling exploration of death, grief, the powers of good and evil, a novel – in its form and voice – completely unlike anything you have read before. It is also, in the end, an exploration of the deeper meaning and possibilities of life, written as only George Saunders can: with humor, pathos, and grace.

It is said that the night Willie Lincoln, who died at the age of 11 of typhoid fever, was laid to rest his father Abraham Lincoln came to the cemetery to visit the body.  It is also said that he held his son’s body, spoke to it.  George Saunders has taken this historical nugget and turned it into a masterwork of beauty and pathos.

Lincoln in the Bardo is a novel narrated largely by the shades that inhabit the Georgetown cemetery over this single night.  These shades are trapped in this limbo, hampered by need, want, and fear.  Their forms are grotesquely reshaped by their obsessions and sins, for want of a better word.  Willie Lincoln’s shade becomes a focus of attention in the cemetery for children’s souls do not linger in this purgatory.  If they do, a horrific fate awaits.  Three shades, Vollman (a businessman), Bevins (a printer), and the Reverend Thomas, do their best to encourage Willie’s soul to ascend.  But Willie’s father has promised to return and so the little boy waits despite the increasing danger. 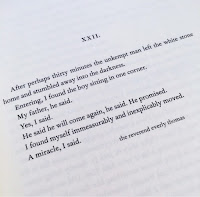 Lincoln in the Bardo is an incredible first novel from a master of the short fiction format.  The shared narration is reminiscent of a Greek chorus or a conversation, rendered on the page like the script of a play. These shades are not Dickens’s ghosts – they are venal, vengeful, lustful, racist, distraught, obsessed with property, old lovers, old slights by family members, old wounds.  In a way, they are in collective denial of their state.  Saunders reflects the condition of the United States, torn by the Civil War as it reached the height of its bloodiest battles, in the inhabitants of this cemetery.  The limbo of Saunders’s Bardo is not the Dantean Limbo of the Inferno, with the virtuous pagans living peacefully throughout eternity; this limbo is menacing, with an undercurrent of evil.  It swirls around Willie Lincoln, who waits in vain for his father to take him home.

I read this book almost immediately upon receiving the galley direct from George Saunders’s hands. It proceeded to wreck me emotionally for the next 350 pages.  The uniqueness of the format allows the characters to speak directly to the reader without any sort of narrative interpretation or point-of-view.  I could read this over and over and keep finding little nuggets to wonder over.  I intend to purchase the audiobook edition of Bardo, which has a star-studded cast of 166 readers including Saunders himself, and just submit to it completely.

Lincoln in the Bardo is available on February 14 – you must read it.

Dear FTC:  I have a signed galley from BEA, which was an absolute highlight of the conference. Thank you so much to Random House and George Saunders for this book.

View all posts by balletbookworm

2 thoughts on “Lincoln in the Bardo by George Saunders”