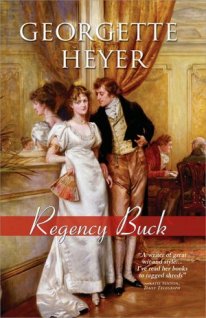 In between reading Devil’s Cub and the first chapter of An Infamous Army, I realized that part of a generation got skipped between the two.  And that a number of characters were introduced in another of Heyer’s books – Regency Buck.  Thanks to the UI’s extensive library collection, I was able to lay hands on a copy of the Taverners’ tale.

Judith and her brother Peregrine, used to living in York, are determined to move to London, with or without their guardian’s consent.  They’ve never met him and he has yet to visit them after their father’s death several months before.  On the journey south, they cross paths with an imperious London dandy…only to find that their esteemed guardian the Earl of Worth, whom they thought to be an elderly gentleman, is that same London buck, Julian St. John Audley.

To whom Judith took an instant dislike since he more-or-less propositioned her in their confrontation.  Ew.

Over the course of the London Season, Judith becomes a darling of the ton and sets her own fashion (like driving her own phaeton) while butting heads with Julian at every turn.  The Royal princes (including Prinny) take an interest in her.  This is where the plotting gets interesting.  Someone starts trying to kill Perry (a duel, a robbery, poisoned snuff) and Heyer does an excellent job at keeping the reader guessing until the reveal.

Now, Regency Buck brings to a head one major issue I have with the Heyer novels I’ve read so far.  She writes excellent dialogue, the plotting is engaging, and her historical research is top-notch (Brummel and the Prince Regent feature prominently) but her characters’ relationships are almost an afterthought.  She sets up her hero-heroine couple in very obvious fashion but the reader is thrown little in the way of inner monologues or confessions of affection until almost the last second.  Having read Regency Buck through, I can look back and pick out instances where Julian and Judith show an attraction, but I had trouble catching them on the first read.  The couple didn’t need to preciptately jump into bed but I would have appreciated some musing by Judith that perhaps she is starting to care for Lord Worth.

View all posts by balletbookworm